The Four Sisters || Which one are you? 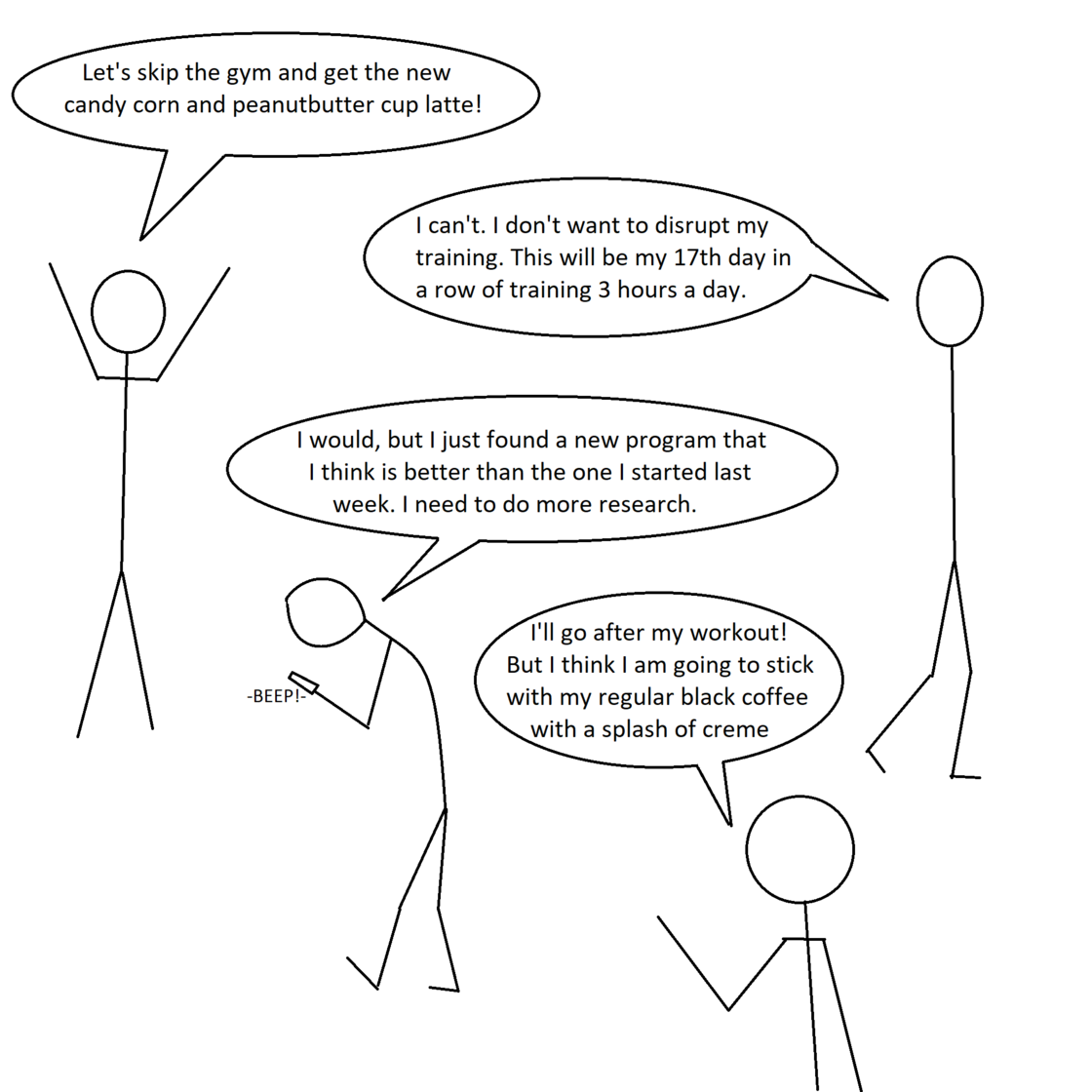 There once were four sisters who all trained together at the gym. They had been there a while, and all of them had hit a point in their training at which they started to have some opinions on how they wanted to train.

The oldest sister decided she would always do the hardest option. She was always looking for the hard path. She relentlessly attacked her weaknesses every day. She always did the hardest programs and went to the toughest coaches. Her diet was perfect, she worked out for hours every single day, and she never took a day off.

The second oldest sister decided that she would always do the safest option. She was always looking for the easy path. She avoided the things she was bad at, seemed dangerous, or didn’t enjoy. She stayed with the easy programs and scaled down most movements. She liked going to the coaches that didn’t push her too hard but cheered her on no matter what. She said her diet was ‘pretty good’, never tracked her food, but she did say “no” to her favorite desert or wine every once in a while. She came to the gym when she ‘had time’ and when she ‘wasn’t too tired’.

The third oldest sister could not make a decision. She was always starting one path or another. She went to a hard class and did the hardest options one day, then didn’t come to the gym for a week. She spent an hour working on a weakness, then did not touch it again for 6 months. She was constantly looking at other routines online, starting and quitting a new one every week or two. Her diet changed week to week, and sometimes it even changed in the same day. One day she started to train for a marathon, and the next day she started a program that would help her with her play better for her softball team. She would come to the gym 6 days in a row, then not come at all for over a week.

The fourth sister was the youngest. She decided to ‘pick her battles’. She spent some time focusing on just being consistent coming to the gym, but didn’t try to crush herself every day. She worked on one weakness at a time but didn’t overdo it. When she started a new program or diet, she stuck with it for at least 6 months, and only worried about small changes that would provide the biggest benefit. When she was feeling overwhelmed, she took it easy. When she was feeling bored, she found a new challenge. When she wasn’t sure what to do, what path to take, she asked a coach. When her progress got interrupted, she didn’t beat herself up or try to make up for it. She just got back to basics and worked on being consistent.

The Sisters Go on a Trip

The four sisters were traveling together in the far east for a vacation.

One of the days, they had some time in the morning before going to visit an ancient monastery.

The sisters were not getting along because the morning hadn’t gone well.

The oldest sister was frustrated because she couldn’t do her full program at the hotel gym that morning and they didn’t have all the foods she needed to eat according to her strict diet.

The second sister wasn’t feeling well because she hadn’t worked out since the trip began, and she kept eating everything that looked tasty.

The third sister was feeling rushed and frantic because spent the morning looking up workouts to do, ran out of time, and was only able to run on a treadmill for 10 minutes. She had to skip breakfast because she was running late and couldn’t decide what to eat.

The youngest sister was having a great day because she slept in a bit. Instead of an aggressive workout, she did some shoulder pre-hab to help her shoulder that has nagged her in the past, then did a short little circuit that left her breathless but not wrecked. She ate some healthy stuff but didn’t feel too bad about indulging in some new treats as well.

The Sisters Were Not Getting Along

When the sisters got to the monastery, they were arguing with one another about their day.

The oldest sister thought her sisters were lazy, making them late all the time, and too laid back. The second sister thought they had woken her up too early, made her guilty about not working out, and judged for eating the yummier foods. The third sister thought they were rushing her too much, ignoring her (not helping her decide what to do), and she was feeling hungry because all of them ate but her.

The youngest sister was just trying to enjoy herself and wasn’t too worried about her sisters.

They had just finished watching a demonstration of the physical feats of the monastery residents, learning about the long history of teaching and training, and getting some instruction themselves, when one of the teachers asked if they had any questions.

One of the sisters asked: “We all have similar goals of feeling good about how we look, being able to do fun things, and staying active a long time… which one of us is using the best approach?”

The teacher looked at each sister in turn and gave them advice.

She told the oldest sister that her training would lead to burn out and injury. The guilt when she missed a workout or ate ‘bad’ was going to make her not fun to be around and make her upset with herself no matter how much she achieved.

She told the second sister that her training was going make her bored and not produce any change. The years would fly by and she will be disappointed with her lack of results. She would feel judged by everyone and wish she had committed to something sooner.

She told the third sister that her training was going take a lot of energy and time, but not produce meaningful results. She will always be frantic to find the ‘better’ program, a ‘better’ technique, or a ‘better’ coach. She will always feel like the ‘next’ program will be the ultimate one, only be disappointed when it doesn’t work any better than all of the others. She will feel that everyone thinks she is a quitter and that the reason that she isn’t progressing is because something is wrong with her.

Then the teacher turned to the youngest sister and said:

“Your way is not the easy way, but it is the best way. And you still have lessons to learn.

You must learn when to push hard, when to let things go, and when to stop and wait.

Sometimes you will feel overwhelmed, so you must learn to accept it, work through it, and plan for downtime in the future.

Sometimes you will feel bored or in a rut, so you must learn to pick a new challenge that is difficult or fun.

Sometimes you will feel confused, so you must learn where you can find clarity or who you can go to for advice.

The most difficult part will be not getting stuck on one path, stuck trying to decide, and to not get swept up in other people’s journeys.

If you continually work on these things, you will get results the fastest and you be most likely to succeed in all the things you desire.”

The rest of the vacation went by and the sisters came back with a new appreciation for the different approaches to training and life.

The oldest sister planned periods of time where she would just have fun with her second sister, and she let herself ‘indulge’ in her favorite foods occasionally.

The second sister picked at least one day a week to really push herself and decided to master one of the movements she liked doing. She also challenged herself to pay more attention to what she ate.

The third sister talked to a coach and settled in on a routine that she can stick to for 6 months. She is going to workout more with her oldest sister to keep her consistent. She is also going to stick with some simple nutrition rules that aren’t too extreme.

The youngest sister was making excellent progress, surpassing her sisters even, making them proud (and maybe a bit jealous).

Then she got pregnant…

But that is story for another time…

I hoped you enjoyed our little ‘parable’ about the 4 sisters!

Which sister do you find yourself relating to most?

Do you understand how to balance your life so that you can have what the youngest sister was working toward and what the teacher was trying to convey?

In life we shouldn’t try to live in extremes. We need to focus on small changes that create balance. We need to look at our schedule and routines and make deliberate changes that will keep us moving in the right direction.

We need to understand that nothing stays the same forever. We must remember that having some clear goals, stopping to ‘take stock’ of how we are doing regularly, and having a plan for when things change, is a recipe for success.